In images of his retrospective at the Orange County Museum, Los Angeles artist Richard Jackson (b. 1939) looks like a pretty frisky, indefatigable painter, inspired by icons of art history from Jacques-Louis David and Edgar Degas to Conceptual artists like Sol LeWitt and Bruce Nauman. Puns and one-liners abound in a sprawling exhibition comprising ambitious work from the past forty years. In
1970 at the Eugenia Butler Gallery in LA, Jackson created a 20 x 20 foot
enclosure out of stretched canvas that he painted by sliding other wet
canvases through it. The painting installation transformed illusionistic
space into architectural space, and turned viewing a painting into an
all-encompassing, time-based experience. The show at OCMA includes a
recreation of this seminal piece, which opened endless possibilities and
changed the way Jackson thought about painting.

In the LA Times, Christopher Knight tries to recount all the ways Jackson uses paint. “Thick, brightly colored paint oozes like mortar from between
thousands of canvases stacked like bricks into a kind of room-size
temple, and it’s smeared in rainbows that unfurl across white walls. It’s shot from a pellet gun at a big drawing and out of the rear ends of
carousel animals toward spinning canvases and sculptures on surrounding
walls. Paint is pumped through neon tubing that spells out the show’s title,
clogging illumination, and into a bathtub copied from one where a hero
of the French Revolution was ignominiously murdered. It has dripped from
glass models of human heads, oozed from squashed metal models of a
ballerina and spewed from a hose wielded by a sculpture of a reclining
nude glimpsed, voyeur-like, through the crack in a barely opened window.
It puddles on pedestals and the floor….This is the only museum exhibition I’ve seen that posts a sign at the
entry warning visitors not to touch the art for the specific reason that
the paint might not be dry.” Richard Jackson, 5050 Stacked Paintings, 1980�2013, Wood, plywood, corrugated board, crayon, pencil, cardboard, glue, approx. 10 x 30 x 15 feet. Installation at Orange County Museum of Art. Photo: � Grant Mudford; Image courtesy the artist and OCMA.
Conceived in 1980, 5050 Stacked Paintings comprises thousands of stretched canvases painted and stacked facedown to create a big sculpture that references the Minimalist forms of Donald Judd. Both glue and image, the paint is reduced to one idea repeated over and over again–a critique of the stylistic conventions and branding embraced by many artists at the expense of experimentation. 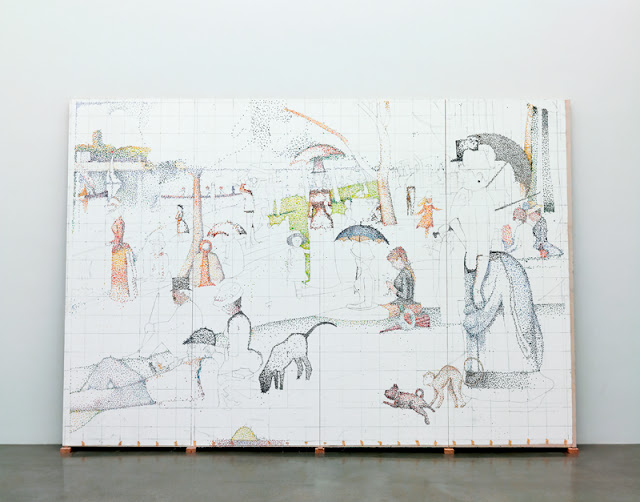 Richard Jackson, La Grande Jatte (after Georges Seurat), 1992-, oil and graphite on canvas, 11 x 16.5 feet. Rennie Collection, Vancouver, Photo: SITE Photography, Vancouver. Image courtesy Rennie Collection, Vancouver.
Considered incomplete, this painting is made with a pellet gun. Jackson dips the pellets into paint and fires them at the canvas–creating an even more labor-intensive process than Seurat had devised. 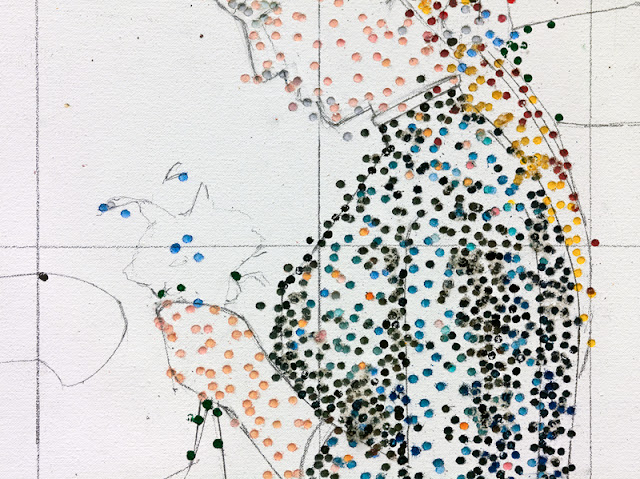 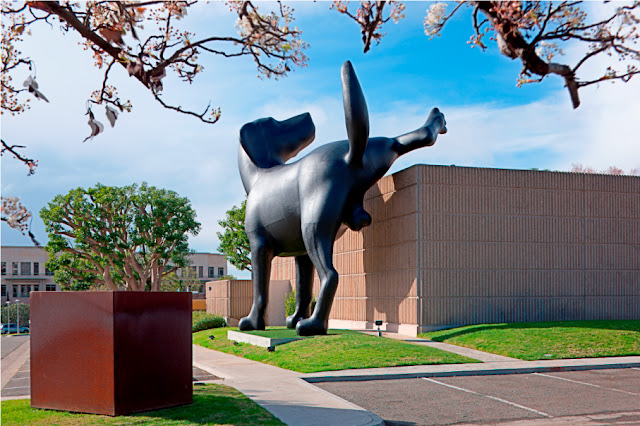 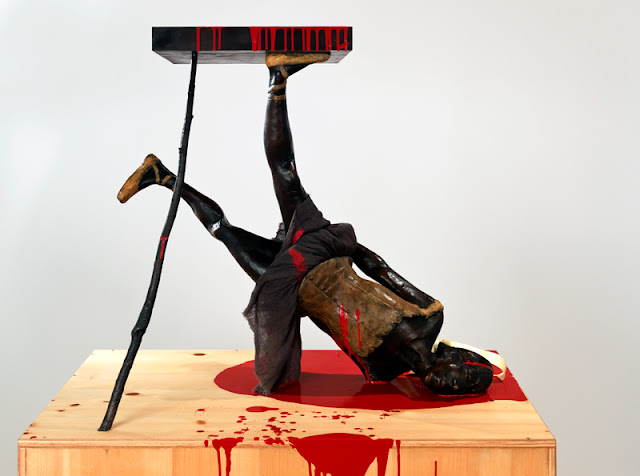 Richard Jackson, Untitled (Project for Orange County), 2013, Canvas, wood, acrylic paint. Courtesy of the artist. Photo: � Grant Mudford; Image courtesy the artist and OCMA.
Jackson paints the front of the canvases and then uses them as “brushes” to create the mural. At KCET, Carolina Miranda fills in some personal details. “Given the rather extreme nature of his painting — he’ll use a Ford
Pinto as a painting tool — Richard Jackson, is a decidedly low-key
guy, He is soft-spoken and clear-eyed, with a penchant
for wry jokes. It is the week before the opening of his show at OCMA,
only the second museum survey of his work ever held (the first was at
the Menil Collection, in Houston, in 1988). But Jackson appears
remarkably relaxed, cruising through the galleries in a set of
paint-splattered overalls. For an artist who doesn’t like to revisit
past works, but instead likes to destroy them, the retrospective feels
out of character. ‘Awful,’ he says with a grin. ‘It’s like going to the
dentist.'”

“When you take part in an activity or are involved in a process, something can go wrong, and that’s when it gets interesting,” Jackson said after his 1988 retrospective at the Menil Collection in Houston. “It’s not interesting if everything is going well.”

Yes, I have to agree. The best stories are about things gone wrong.