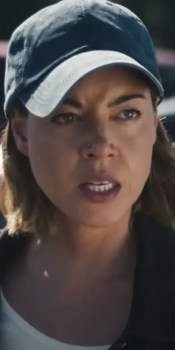 Emily, the struggling artist and the criminal

Contributed by Jonathan Stevenson / In writer-director John Patton Ford’s grippingly lean and gritty thriller Emily the Criminal, the audience is immediately thrust in scene with Emily Benetto, who works for a caterer without benefits. Absent exposition, she simply seems petulant and put-upon, not unlike many young adults trying to make their way in an increasingly forbidding world. Forced to quit art school, Emily is saddled with $70,000 in debt and no marketable credentials. But thanks to the dark nuance of Aubrey Plaza’s terrific performance and Ford’s crafty screenplay and cold-eyed direction, it remains clear that something ugly and ingrained lurks behind Emily’s immediate circumstances. Despite early appearances, this film is not a didactic contemplation of the false seductions of the middle class in twenty-first-century America, and only incidentally concerns female empowerment. It is centrally about character and how immutable it is or isn’t.