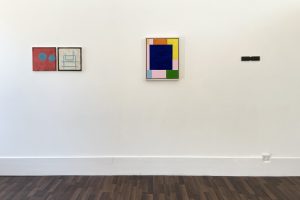 Contributed by Sharon Butler / In 2012, artist, writer, and curator Brian Edmonds founded Curating Contemporary, an online exhibition space that, since its inception, has hosted over fifty exhibitions. Then, in 2019, Edmonds took his project to print, and began publishing Eraser, a biannual book featuring the work of contemporary artists and writers. This year he has organized an exhibition called “Eraser” at Ground Floor Contemporary, in Birmingham, Alabama, that brings together some of the artists who have been featured in his publications. I’m pleased to be included in the fourth Eraser book and also to have two paintings in the show, alongside work by a great group of artists: Matt Kleberg, Jered Sprecher, Jason Stopa, Sean Sullivan, Vadis Turner, Cecilia Vissers, Don Voisine, and Thornton Willis.