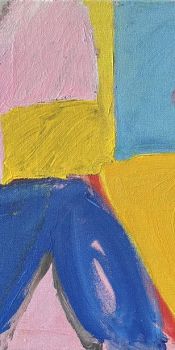 The paintings come from drawing—not finished plans but compositional ideas that make way for the painting process. Each shape is an instance of color and a dissolution of strokes that partially reveals its underlayers and the adjustments that led to its present condition. The initial linear-spatial impetus remains, as does the bare ground on which everything gathers…

Contributed by Vittorio Colaizzi / The first plate of Barnett Newman?s Notes, a series of etchings from 1968 that are on view at Craig Starr alongside Brice Marden’s “Suicide Notes,” contains an outlandish concentration of marks in the lower left of the central column. With this plate, as with his painting Achilles (1952), it seems as if he was pushing the limit of his own format, to see how much incident he could include without, in Donald Judd?s terminology, ?weakening? the composition.