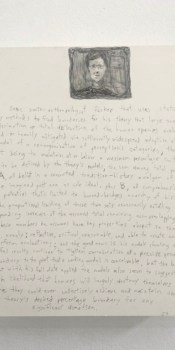 Contributed by Jonathan Stevenson / There’s a Seinfeld episode in which Elaine, annoyed by the knowing ellipticality of a New Yorker cartoon caption, marches into the august magazine’s offices and confronts the editor – portrayed to preppy-geek perfection by the late Edward Herrmann – about its meaning. After offering several generic, pretentious, and abjectly unconvincing interpretations, he admits that he has no idea what the hell the caption is supposed to mean. Jeff Gabel – whose elaborately narrated drawings and paintings, a few site-specific, are presently on display in a solo at Spencer Brownstone Gallery on the Lower East Side and a group show at Jennifer Baahng Gallery on the Upper East Side – runs no such risk, abjuring obscure glibness for mordantly wise, sourly penetrating bloviation.