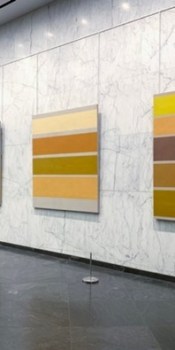 Contributed by Michael Brennan / The seven large paintings in Kim Uchiyama’s solo show “Heat and Shadow” at The Lobby Gallery were inspired by Greek temples located in Sicily. They are rigorous, modernist, and abstract. But what might ancient sacred spaces have to offer anyone in midtown Manhattan in 2022? 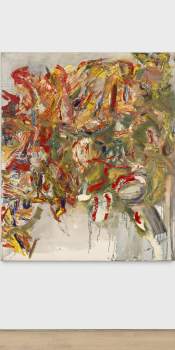 Contributed by Michael Brennan / The virtues of some art emerge only when it steps out of its own time. Hilma af Klint’s 2018 retrospective at the Guggenheim is an example. Another is Lou Reed’s album Berlin, released and widely panned in 1973, only to be performed and filmed by Julian Schnabel 35 years later, celebrated by an unforeseen audience, and subsequently considered a canonical masterpiece. Cora Cohen did exhibit her work in the 1980s and has been showing regularly, at a high level, since the 1970s. She’s a well-known, well-regarded painter. But the eight large abstract paintings from the 1980s, now on display at Morgan Presents, haven’t been shown together until now. They are a revelation that couldn’t have fully registered in its own time. 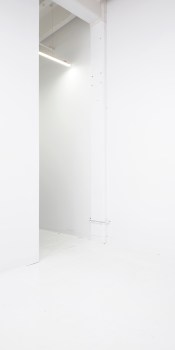 GJ Kimsunken: Abstraction and the figure

Contributed by Michael Brennan / I first saw GJ Kimsunken’s work in person last fall in an exhibition at Yi Gallery titled “Where We Meet Ourselves.” Sensibly pairing his paintings with Debra Ramsay’s, the two-person exhibition mainly investigated light and materiality. With his solo exhibition “Figuration,” the gallery, which is in the emerging art corridor of Industry City in South Brooklyn, has mounted another striking and sensitive show, making optimal use of its studio-sized space. Kimsunken has largely maintained his method and approach while illuminating the substantive inflection and character of his work.