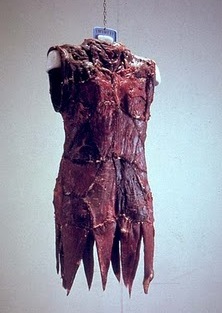 Jana Sterbak, “Meat Dress,” 1987.
Over on Twitter yesterday Jen Dalton started a debate about the male-dominated “Art Madness” competition, which Tyler Green has organized at his ArtInfo blog, Modern Art Notes. I’ve never liked the idea of ranking art and artists, so I won’t participate in Green’s game, and I hope others will join me in abstaining. Artist Brian Dupont responded to the overwhelming testosterone of the selection with “Bracketology,” an excellent blog post that addresses the implications of the nearly all-male list. Green contends that the list is about “artwork” not “artists” and that there aren’t as many specific pieces by women artists that fall into the “masterpiece” category. Which begs the question, what makes a “masterpiece?” Tomorrow I’ll post Part II, which will include the alternate lists that are filling the inbox as I write.

Here is Dupont’s essay in its entirety:

Although I am not a basketball fan, the NCAA tournament has always represented the turning point where winter turns to spring. I have no interest in March Maddness or associated workplace gambling; my sport is baseball and the annoyance posed by my co-workers trying to get me to go in on the office pool really only means that opening day is around the corner�

This is the second year Tyler Green has given his readers a set of brackets ostensibly for the art world. Last year he pitted the America�s abstract painters against one another (Cy Twombly beat out Ellsworth Kelly for the crown), but this year�s version is a bit more problematic. He aims to present a tournament of the greatest post-war works of art, but has instead managed to expose just how ingrained some of the systematic biases that haunt art and its attendant institutions can be.

Looking at his selection of 64 works of art, you�ll find only 3 works by women: Cindy Sherman�s Untitled Film Stills, Marina Abramovic�s Rhythm 0, and Maya Lin�s Vietnam Veterans Memorial. On the other hand, most of the (very) old white males of the art historical canon are represented multiple times. Ruscha, Serra, and Judd are found twice; Richter three times; Johns, Rauschenberg, DeKooning, Pollock, and Barnet Newman four times; and, perhaps fittingly for this kind of popularity contest, Warhol leads the pack with five works. That�s more than half the total bracket represented by only 10 (white) men.

Mr. Green did not generate the list of works himself; he amalgamated a seeding selection from five guests (two of whom were women) to get the final brackets, but the process is his, and despite facing complaints from myself and others (on Twitter) he has chosen to defend these results as given by the process he set up. I have suggested (in an exchange on Twitter) that such results may point to a flawed process and that as the organizer he could have made some changes, but his response was �Why on earth would I presume I�m so smart I should overrule the five other (distinguished) people I invited to contribute?�

An exercise of this sort, intended to be lighthearted and in good fun, is bound to contain most of the works that populate the very end of a mammoth art history textbook. The broad outlines and movements of post-war and contemporary art will be illustrated with a few key works, as space allows. If women and minorities are not well represented, whose fault is that? The makers of the list only picked personal favorites and had them compiled after all. If Joan Snyder, Helen Frankenthaler, Eva Hesse, Lee Bontecou, Ana Mendita, Anne Truitt, Agnes Martin, Lee Krasner, Lynda Benglis, Carolee Schneemann, Judy Chicago, Howardina Pindell, Elizabeth Murray, Dorthea Rockburn, Mona Hatoum, Yayoi Kusama, or Louise Bourgeios (to name just a few of the notables from the same time period as most of the works on the list off the top of my head) weren�t the favorites of these critics and curators, why is that necessarily a problem within the context of this harmless little game?

The answer is that because Mr. Green�s game has managed to illustrate quite succinctly how easy it is to exclude women and minorities and still have everyone involved remain blameless. Whether it be a small lark of a bracket or the larger art world, it is too easy to point at a system or process as an excuse without actually examining who set up the system or how. It may be �just a game�, but games allow us to distill and process some of life�s messier and complex interactions into a simpler form that is more comprehensible for its abstraction. In short, they make it easier to see what is fair, and I think it becomes very clear that the system as devised is not (either in the brackets or the art world).

At least in the case Art Maddness II, the problems are easier to identify and fix. Looking at the list I think it is evident that there are shifting evaluations based on lax guidelines. If it makes sense to consider Cindy Sherman�s entire Untitled Film Still series and Gerhard Richter�s Baader-Meinhof paintings as a single entity, why does Jasper Johns need three different flags? Is Three Flags really that different from Flag? Similarly, how different are the DeKooning Women or any of the Newman zip paintings? Is the point to consider groundbreaking work or major statements? Isn�t Vir Heroicus Sublimis so closely related to Onement I that context that they can be discussed in the same breadth? Pollock�s individual drip paintings are different enough, but isn�t their scope related to the collective breakthrough they represent?

Lest I be accused of not presenting an alternative, I find that I only need to look at another rite of spring, one that relates to my own sporting interest and would not require any great investment to change. Every spring Baseball America ranks the top 100 prospects in baseball�s minor leagues. It is every bit as contentious as any other interested battle of minutiae, and their process is remarkably similar to Mr. Green�s. Each of their writing staff compiles a list of their opinion of the top prospects, and the results are compiled in a spreadsheet. However instead of that being the end of it and having the final list generated by having Jim Callis hit �print�, the writers get together to look at the raw results and debate and argue for them. They curate the list, revising and reconsidering so that there is, if not consensus, then at least a sense that the biases and idiosyncrasies that arise from such a small sampling of opinion can be removed and that the final list is stronger. Mr. Green could have had a simple conference call with Michael Auping, Kristen Hileman, Dominic Molon, Ed Schad, and Katy Siegel to see where duplicate works that present the same idea could be reconciled, and to see what deserving works that may have been left off could take the place of the duplicate.

To be inclusive may have been a bit more work, but it is disappointing that a writer who purports to hold himself to high standards and certainly holds others to similar account did not make the effort. The tournament hosted by Modern Art Notes is a small offense, but the reason to speak out against such minor infractions is to hold the larger system to account. That �it�s just a game� shouldn�t be an excuse if we don�t want �it�s just art� to be a similar refrain. 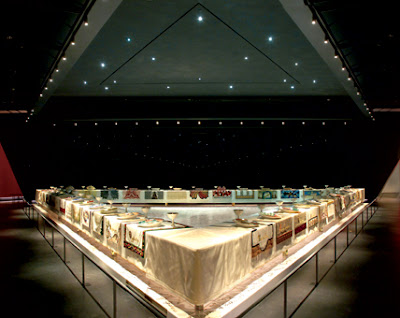